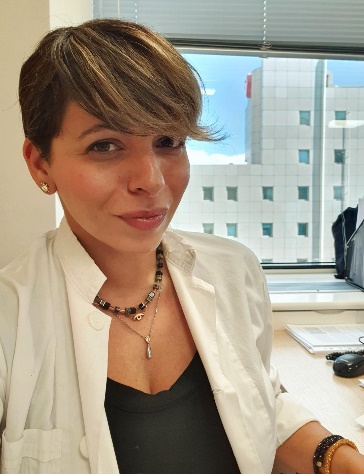 Dr Anastasia Papafili was born and raised in Athens but completed her high school education at the European School of Brussels. She holds a BSc in Molecular Biology (1998) and an MSc in Molecular Medicine (1999) from University College London (UCL). She was awarded a Wellcome Trust Prize studentship to investigate the role of novel COX-2 variants in the inflammatory response and received her PhD in Biochemistry from UCL in 2004. She published her research in reputed journals and presented at several conferences in Europe and the US. Subsequently she obtained her medical degree (MBBS) from UCL Medical School in 2008.

Dr Papafili completed her Internal Medicine training in London (2008-2012) having rotated through major London Hospitals including Royal Free, St Georges, Royal Marsden and the UCL Cancer Institute. She obtained Membership of the Royal College of Physicians (MRCP) in London in 2012 prior to moving to the Northern Ireland Cancer Centre for her 4-year specialist training in Medical Oncology where she gained valuable experience across a variety of tumour sites as well as Phase I clinical trials. She moved back to Greece in 2016 and worked for 3 years as a Medical Oncologist at the Metaxa Cancer Hospital of Piraeus.

Since July 2020 she is a Consultant Medical Oncologist at the Athens Medical Centre and is also affiliated with the Oncology Unit of Athens School of Medicine, NKUA, “Sotiria” General Hospital. Her main interests lie in Lung, GI malignancies and Neuroendocrine Tumours.